Megapixels - they're not a megaproblem anymore

Because – light of my life and seat of my desires – “It really doesn’t matter anymore.”

Digital pictures are made of a grid of coloured dots called pixels. A megapixel is a million pixels – about the same number that makes up the picture on your computer screen. The more finely a picture is diced into pixels the more megapixels it will have, and – all other things being equal – the more detail it can show.

But all other things aren't equal.

They used to be, but not now. Not for most people, anyway. Back in 1996, the first major newspapers started to get rid of their film cameras for the latest US$18,000 “filmless” (digital) ones. These cameras had just 1.3 megapixels, and they could be used (at a pinch) to shoot the front covers for magazines. The quality of these digital cameras really was limited by the number of pixels they had. Film gave better quality. It wasn't until the end of 2003 that National Geographic ran its first full feature shot exclusively with a digital camera - a 5.4 megapixel model.

Now even the cheapest digital cameras have more than enough pixels to make big prints. There's even a phone with a 41-megapixel camera. It's other things, not the number of pixels, that decides how good the pictures will look. Good lenses and good technique are now way more important. More pixels often just show up these limitations more clearly, and take up more space on your memory cards and computer.

Not all pixels are created equal. Inside the camera, the pixels come from a digital sensor that sits where the film used to be. The sensor of my $10,000 camera is 20 times bigger than the sensor in most compact cameras. So the smaller camera needs 20 times more light, and a lens 20 times sharper for the picture to look the same (this is over-simplifying, but bigger sensors really are better). Without the extra light and a spectacular lens, the pictures on the smaller camera will be fuzzier, even if it has the same number of pixels.

This is why digital SLR cameras out-perform compact cameras for shooting indoors, where there is just one thousandth of the light compared to outside. Have a look at our low-light comparison here. A second-hand six megapixel digital SLR will consistently out-perform any current 12 megapixel compact camera indoors – even those costing more. In good light outside, you'd hardly be able to tell any difference between the two – it would come come down to how good their lenses are, and how good your technique is.

How many megapixels do I need?

In my opinion six megapixels is enough for 98% of uses, and you can only make the most of that many pixels if you have a good lens and use it carefully. At our photography courses, we pass around an 18”x12” print (45cm x 30cm) of the picture below, made on an old six megapixel camera with a good lens. 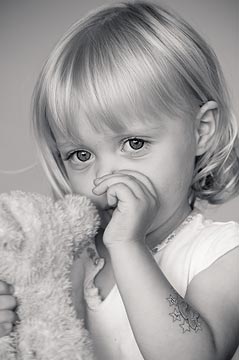 Everyone agrees that the quality of the print is fine to put on the wall. If you hold it right up to your nose, you can almost make out the pixels. But you can't enjoy a poster when looking at it from three inches away! Bigger pictures are meant to be viewed from further away, so I could blow up this picture as big as I wanted, and it would still look fine at home on the wall. More megapixels would be a waste for me.

But other types of photography demand as much detail as technology can give, and always will. Fine-art and commercial pictures sometimes rely on intricate detail to make the picture work, even when blown up to the size of a billboard. You can't do that with a compact digital camera or a digital SLR, no matter how many pixels are crammed into it. Instead, it takes bigger, specialised tools. And for as long as commercial photographers compete with each other, the development of these tools will never stop. Currently, the cameras for this type of work have up to 80 megapixels on a huge sensor, or use enormous sheets of film that are 5”x4” or even 8”x10”. Digital cameras haven't caught up with film for this market yet, so there's room for lots more megapixels and even bigger sensors. But the rest of us already have enough megapixels, thank you.

Film has a different “look” to digital, and reacts differently to light, so it's not comparing apples with apples. Digital pictures look “cleaner” than film, with less speckling, so digital pictures look better even when they carry less detail. But film isn't totally dead yet: negative film (normal film for making prints) can cope with a broader range of brightness in a single photo than can most digital cameras.

But how many “pixels” has film got? I used to scan my slides and negatives at 24 megapixels, until I realised that I was only getting a more detailed picture of the grain that makes up the film. I was using more megapixels than necessary. For practical purposes, I find that six megapixels is about the same on negative film or digital. This is only a rough number – good quality slide film is much better than this, cheap print film can be worse – but it's a starting point.

So why buy an expensive camera?

Why did I pay $10,000 for a camera? Not for the megapixels. I could have got a stunning camera that takes photos just as sharp and has more megapixels for half that price. I got it because it shoots quickly, focuses quickly, it's easy to use, and it gives excellent quality in low light, so I don't miss as many priceless moments. It does very little that I couldn't do with a cheap SLR, it just does everything better and faster. When I'm shooting unrepeatable events for other people, each photo that I miss while waiting for the camera costs money.

In January 2008, I also bought a 5 megapixel camera for $100. And I think it's got enough megapixels for what I want to do. I've been amazed at the photos it can get - here's a gallery of photos I'm taking with it. And it takes videos too. I don't worry about taking it to the beach. I throw it in the bottom of the pram when we go out with the kids, so it's always there. The things that happen in front of its lens are often more fun and interesting than the things that happen in front of the lens of my expensive camera. And that's the key to great family pictures that I'll cherish for life.

If you're looking for a new camera, don't get caught up in the megapixel marketing. The days are long gone when it's worth paying for extra pixels.

So next time someone asks you how many megapixels your camera has, put on a nonchalent voice and just say “Enough”.

Commments? Suggestions? Have we made a mistake? We'd love to hear from you. Please write to us at courses@takebetterphotos.com.au