My 3 hardest-won lessons in travel photography

Lessons from a photographic honeymoon in Cambodia 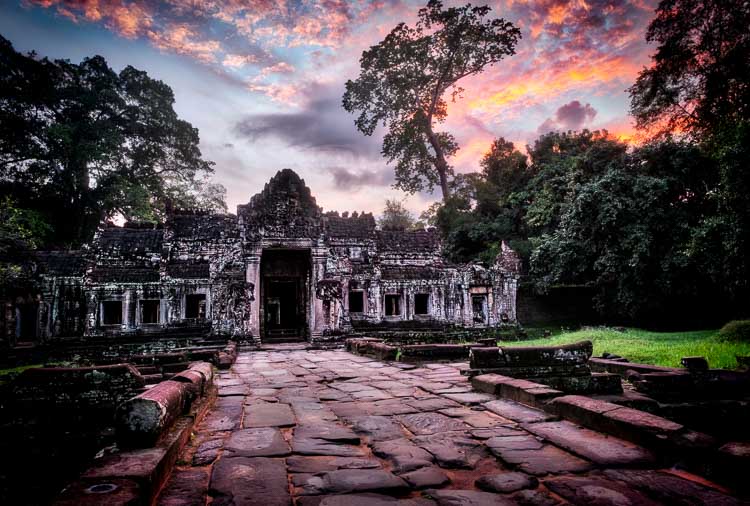 The silence of the temple was shattered as the guard’s dogs raced at me through the dawn gloom, their eyes glittering green from my head torch. Dumbstruck, I stood rigid, my camera half way to my face. They reached me in seconds then froze at a command from the guard. He sized us up as he walked to us - two Westerners and a driver. Trespassing. He looked tired - we must have woken him. Then he exploded, yelling in Khmer that we were all criminals. Welcome to our photographic honeymoon in Cambodia, where I learned my 3 most important lessons in travel photography.

1. Take an instant printer. It will transform your holiday. I won’t leave the country without one now.

2. Take only the camera gear you’ll enjoy using and leave the rest. It’s a holiday, not a test. 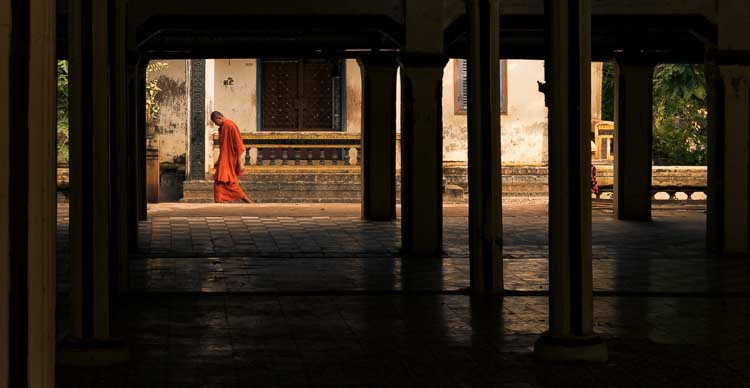 To celebrate our 20th anniversary, my wife had surprised me with 5 nights in Cambodia and a choice of any camera gear that I wanted to take. I have the best wife in the World. And possibly the most naive. I’m a professional charity and family photographer, and because I want to get to my 21st anniversary, I’d chosen to supplement my affordable Fuji X gear for the trip, not try to fleece her with a Phase 1. Here’s what worked, what didn’t, and what I learned from travelling hand-luggage only with a patient, supportive, wonderful, beautiful wife who might read this.

An instant printer will transform your holiday. People love it. It flips your interactions with everyone - you can give photos, not just take them. I’ve spent fortunes on holidays trying to get away from the tourist trail to find the ‘real’ country and meet real locals who aren’t yet jaded by the tourist game. The printer reminded me that it’s available anywhere. 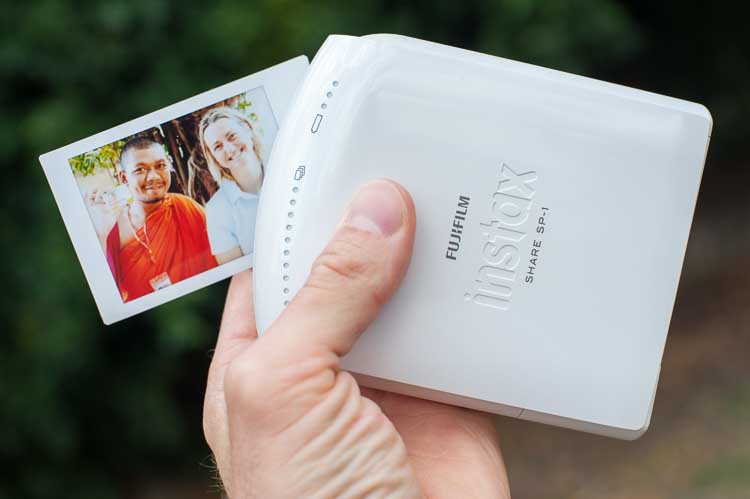 The Fuji Instax SP-1 instant printer that we took. It's $200. Prints take about 4 min to fully develop.

We took the Fuji SP-1, a genuinely portable instant printer, with batteries good for a realistic 50 prints on Fuji’s paper - a $15 cassette holds 10 sheets. From shoot to wireless print direct from a phone or Fuji camera takes 25 seconds (15 seconds on the newer SP-2) including establishing the wireless connection. Then the picture starts to appear, Polaroid-style. No computer needed. 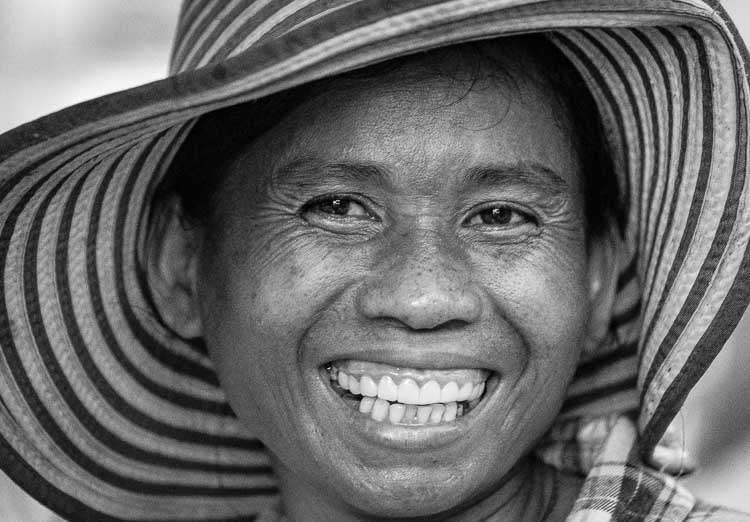 Sue and I developed a “hustle” to make the most of the printer as an ice breaker with anyone. Here’s how it worked…

We’d find a group with someone I wanted to photograph, and ask to take one person’s picture - I’d ask men; Sue asked ladies. Nobody said no. I’d take a flattering portrait then print it and Sue present it to them with a flourish. Nobody could resist the magic of their picture slowly appearing in their hand, and as the smile crept over their face, the real shoot would start. They’d call their friends over - jokes all round, leg-pulling, lots of fun and laughter together and photos of genuine expressions. All their friends and relatives would want a picture too, and I could spend 15 minutes doing what I love - playing and taking pictures of people having fun. 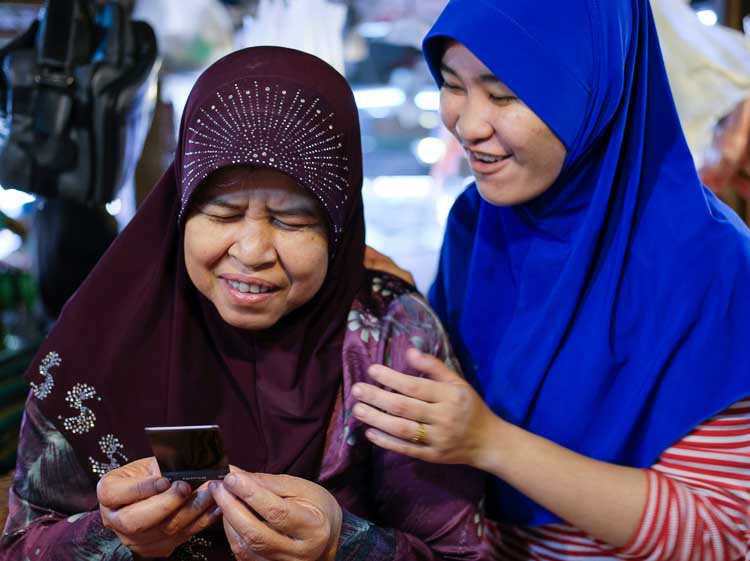 The result stunned me. Street vendors gave us free stuff. We chatted about families, marriages, and life with people who were strangers a moment earlier. We built memories that still make me smile as I write this. And I love the photos too, because they capture the thing that struck me about Cambodia - how openly friendly the people are. 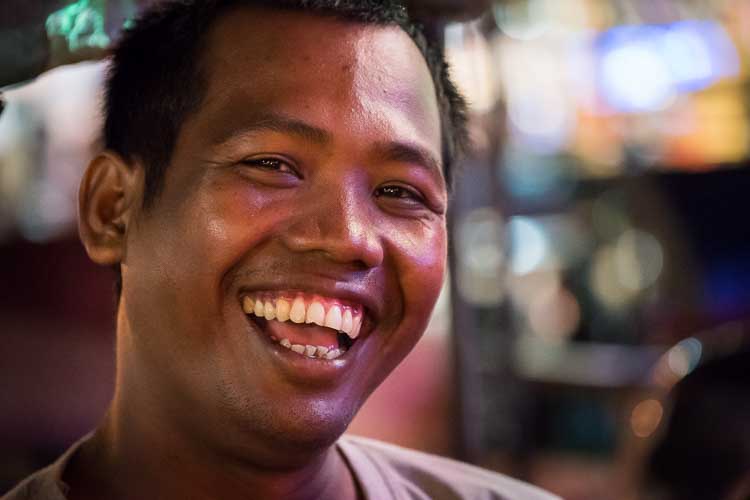 It made me realise that cameras are only powerful when their results are shared. And perhaps they normally get in the way because they’re not shared. But the printer changed everything. AU$1.50 per print was all it took to get past the tourist facade and into genuine interactions. That’s the best return on investment I’ve had from any photographic tool. 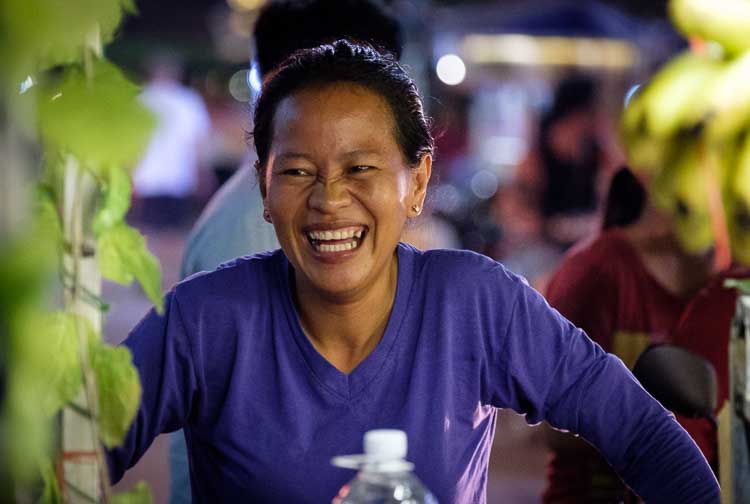 Tips to get the most from the printer:

Our approach worked best with groups, not individuals. It was the social element that made the difference. The prints sparked them playing together, and gave us a green light to join in and take photos. But with individuals, there was no social energy for us to tap into, so we often just got their “camera face” - a standard smiley portrait. With individuals, the printer still worked as an ice breaker, but by itself it wasn’t a shortcut to making a connection.

Use the printer as soon as you get to a place, so you’ll have more time to build on the relationships it makes for you. It’s wonderful to walk down a street on the other side of the World and be greeted by people you’ve shared fun with.

Since I’ve returned, I’ve used the printer on professional shoots, especially with charities. It’s a quick way to show subjects that you’re harmless at worst, and potentially useful. I won’t leave the country without an instant printer now. 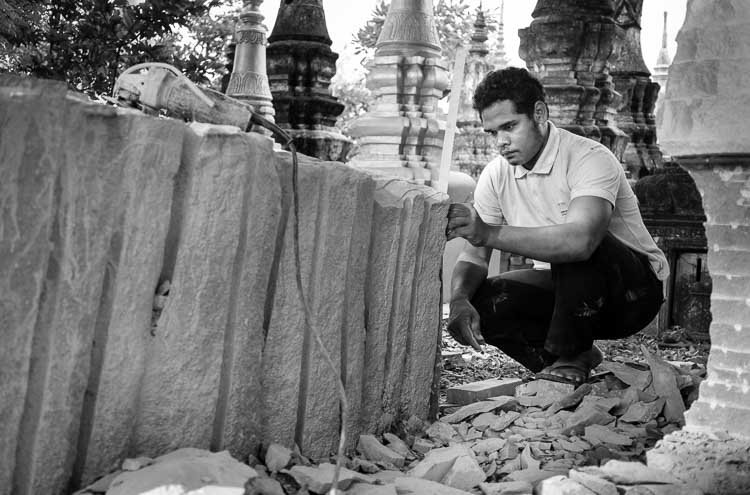 A stonemason carves an elephant. After giving him a couple of prints and time to share them with his friends, he was comfortable with me taking my time with lots of pictures. Wat Bo, Siem Reap, Cambodia. Fuji X-Pro2, 27mm f/2.8 lens at f/2.8, 1/150 sec at ISO 200. Early morning shade.

Everyone has opinions on what camera equipment is “right” to take on holiday. Ignore them all and take what you’ll enjoy using.

I’ve spent 25 years doing this the wrong way, and I think I’ve finally cracked it now. I used to worry about missing shots if I didn’t take lots of camera gear, and I’d worry even more about missing family moments if I did take lots of gear. Everything was driven by worry and compromise. I suspect I’m not alone.

I’ve tried taking all the camera gear (called the “invading infantry” look by David Hobby), I've tried just an iPhone, and I've tried small mirrorless cameras as a Goldilocks compromise (didn't work for me). But the worry never went away - I was always aware of what I was missing. Seriously… what else in life attracts so much guilt? If you’re a parent, probably everything. But this is meant to be FUN. It’s a holiday! A hobby! It’s not a test.

I’ve realised that it’s the wrong thinking. Flip it around and start from what you love about photography.

That’s what I tried this time, and the worry disappeared. Along with a sensible, small travel camera, I took Fuji’s version of my all-time favourite work lens, the 50-140 f/2.8. It’s a hulking beast that no sane person lugs on holiday. 1kg of “look at me!” self-consciousness. A portrait lens that still lacks the zoom power to shoot people from a discreet distance. And I loved it. Had a ball. Felt like a kid with a toy again. You won’t, unless it’s your favourite lens too. But I did. 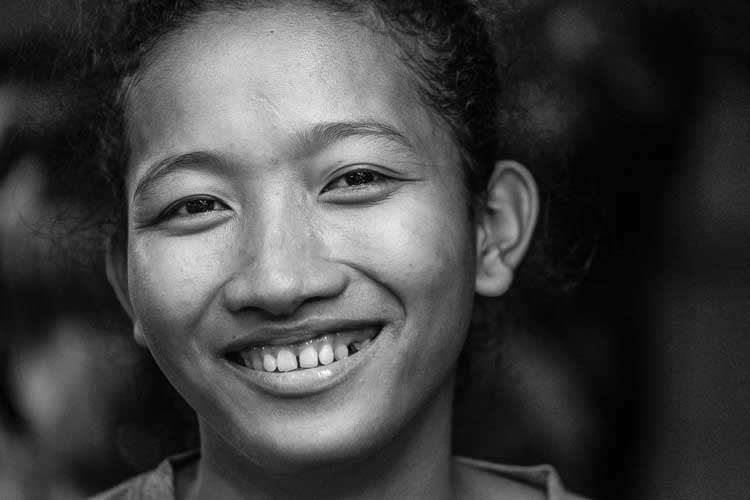 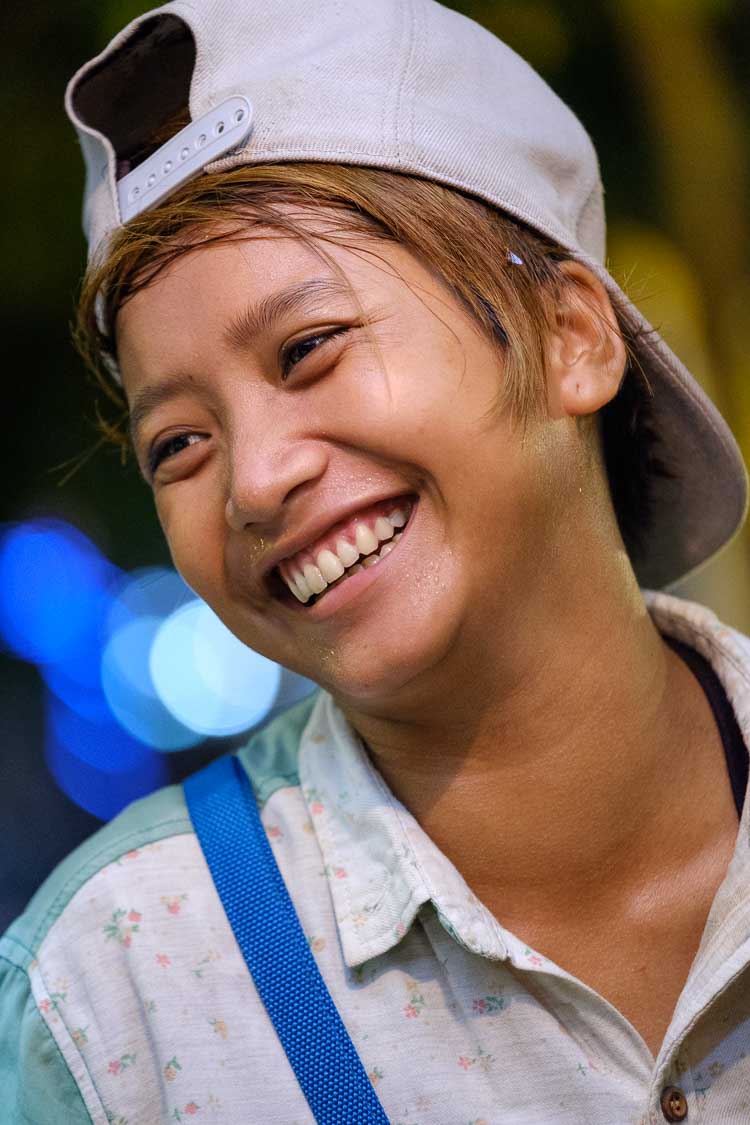 Was I self-conscious? Yep. Did I look like a tourist? Oh, yes! It’s not like I was going to blend-in anyway being 20cm taller and 50 shades lighter than the locals.

But I had so much fun. Not just “I liked the photos”, but I actually enjoyed using it. Along with the printer, it let me shoot spontaneously the way I like to shoot, and have a great time with locals too. Nobody else sees the World like you, so the best gear to take is whatever lets you share the world the way that you see it. I can’t believe that it’s taken me so long to really put it into action.

In a world of hyperabundant content, point of view will become the scarcest of resources.

So pack what you’ll enjoy and leave the rest behind. If you don’t know what that is yet, it just means you need to buy more cameras or lenses develop your own style. Don’t pack for what you’re worried you’ll miss, pack what will let you share how you see.

What did I take? I’ve put my list at the end, but you take what YOU like instead. 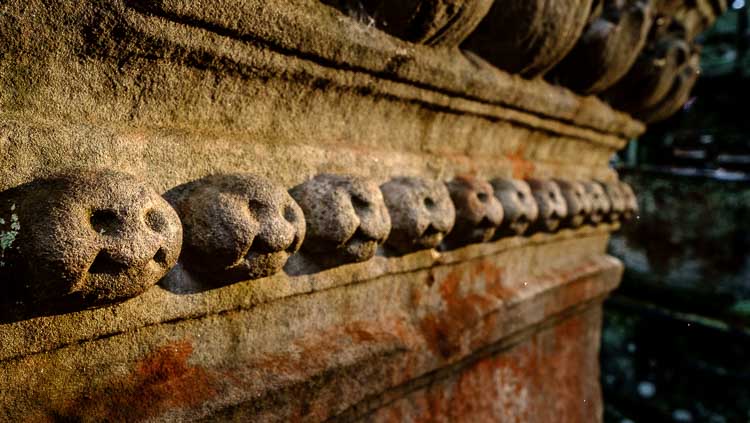 Get in touch with a local photographer or ‘fixer’ before you travel to get the latest local information. Find them on Flickr, FaceBook, or sign up for a local photography course or group. I did all the usual research before travel: locations, sunrise and sunset times, Google Earth checks for angles, confirming opening times to temples, and read lots of excellent guides by photographers on the location. But all the information was out of date, because the Cambodian government made new rules in 2016, and they’re not publicised online. 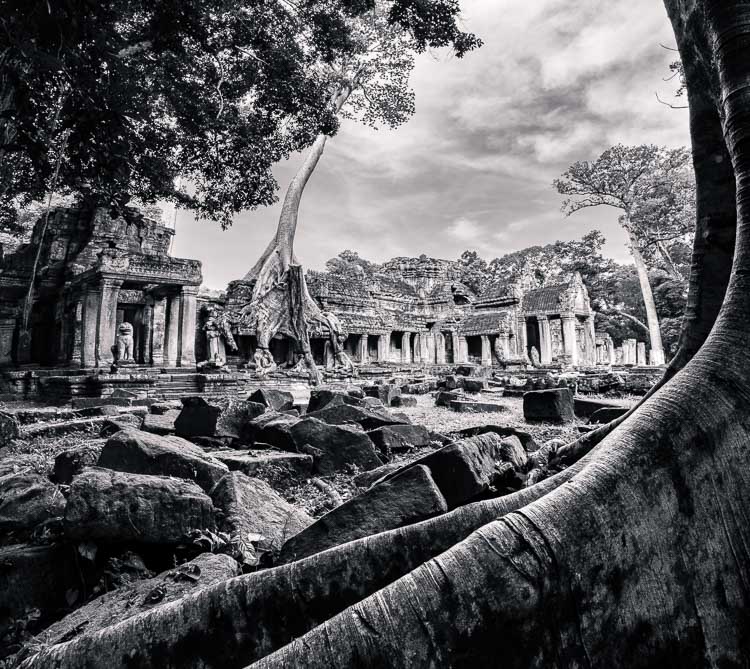 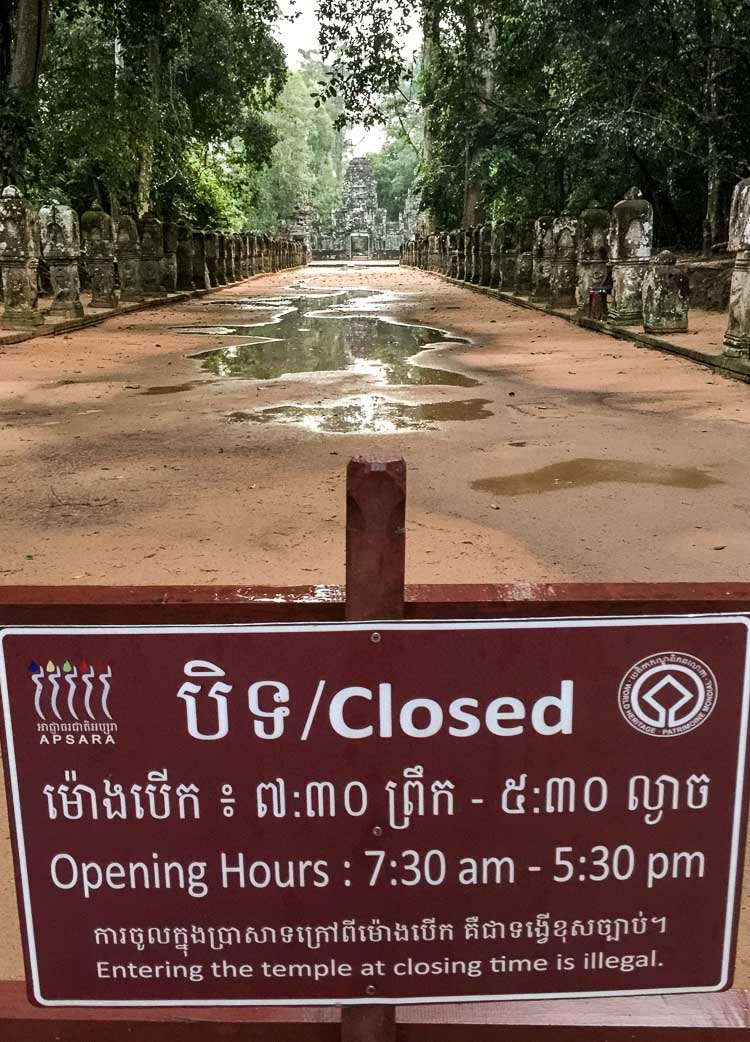 Photographers appear to have screwed it up for everyone in Cambodia. The government’s new rules prevent access to all but three of the 35 Angkor temples and sites outside of 7:30am to 5:30pm. According to locals, the rules were introduced specifically to keep out photographers after several thoughtless groups did nude shoots at dawn in temples that are sacred to many and that have strict behaviour and dress codes.

So no more dawn and sunset shoots at some of the most photogenic places on earth.

A private security company enforces the new times with astonishing enthusiasm, as I discovered on my first morning when the change was news to me. There was little room for negotiation with the guard or his dogs described at the start of this article. But he did let me take one photo before escorting us out, and that's the opening photo in this article.

In the interest of full disclosure, the guard’s dogs turned out to be the size of poodles when they got into the light of my head torch, but it I don’t normally share that detail. They’re just out of shot in the photo, hidden behind a pebble.

The only temples for soft pre-dawn light are Sra Srang, Pre Rup and the biggest and most famous, Angkor Wat. But you’ll need to share nicely. By 6:00am, Angkor Wat had 800 photographers at just one of the two lakes:

800 photographers jostle for shots of Angkor Wat reflected in a lake before dawn. This may not be your idea of peaceful, relaxing photography.

This situation clearly isn’t in anyone’s interest, so surely it will change eventually. Maybe they’ll charge extra for premium access out of hours? Legitimate photographers would gladly pay. But at the moment, if you’re thinking of visiting Cambodia to take photos at the stunning temples, you’ve picked the wrong year. You might want to wait to see if sanity returns first.

Lesson learned: get the local intel, and don’t just rely on the web. 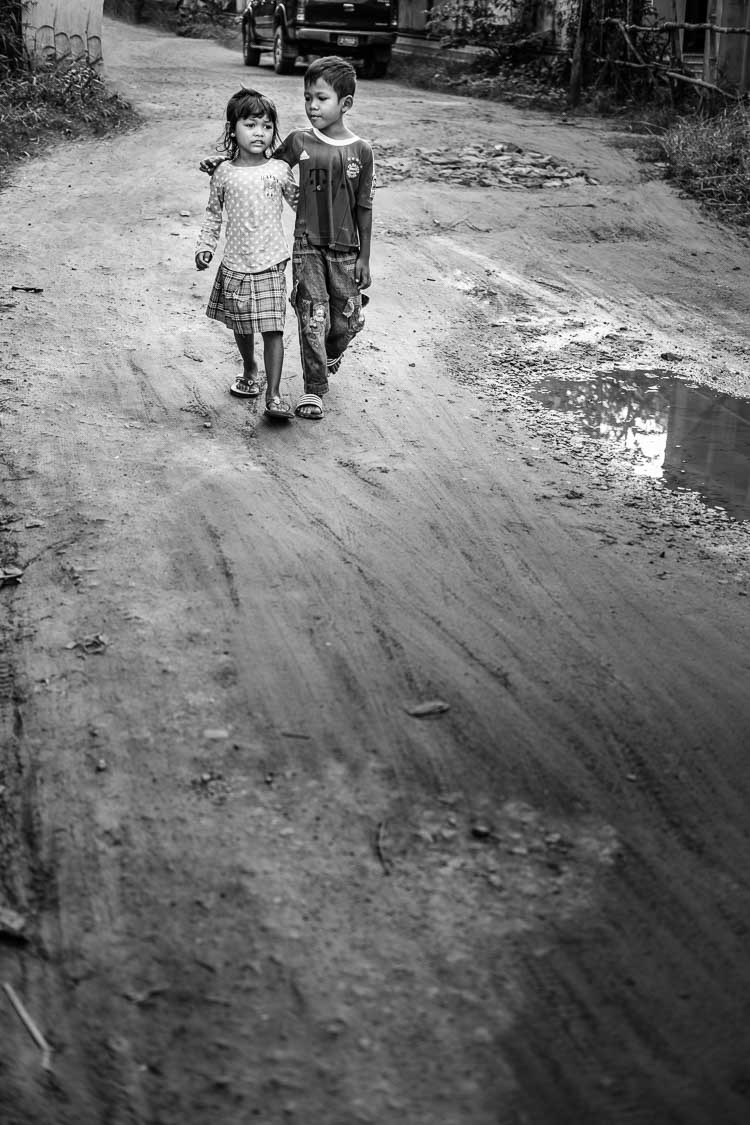 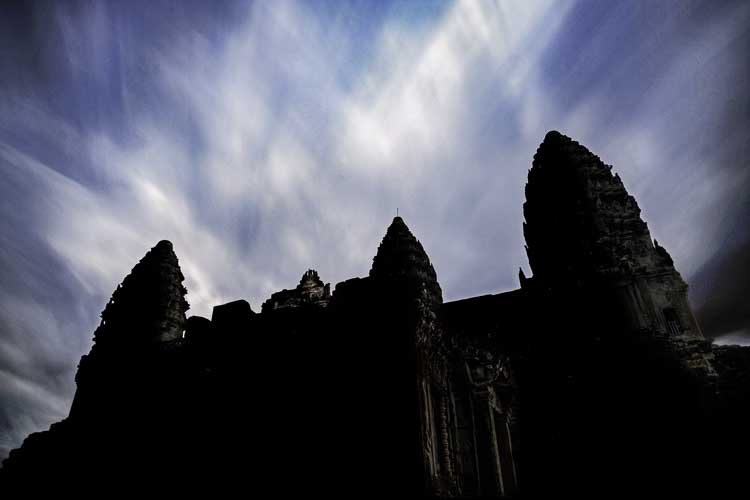 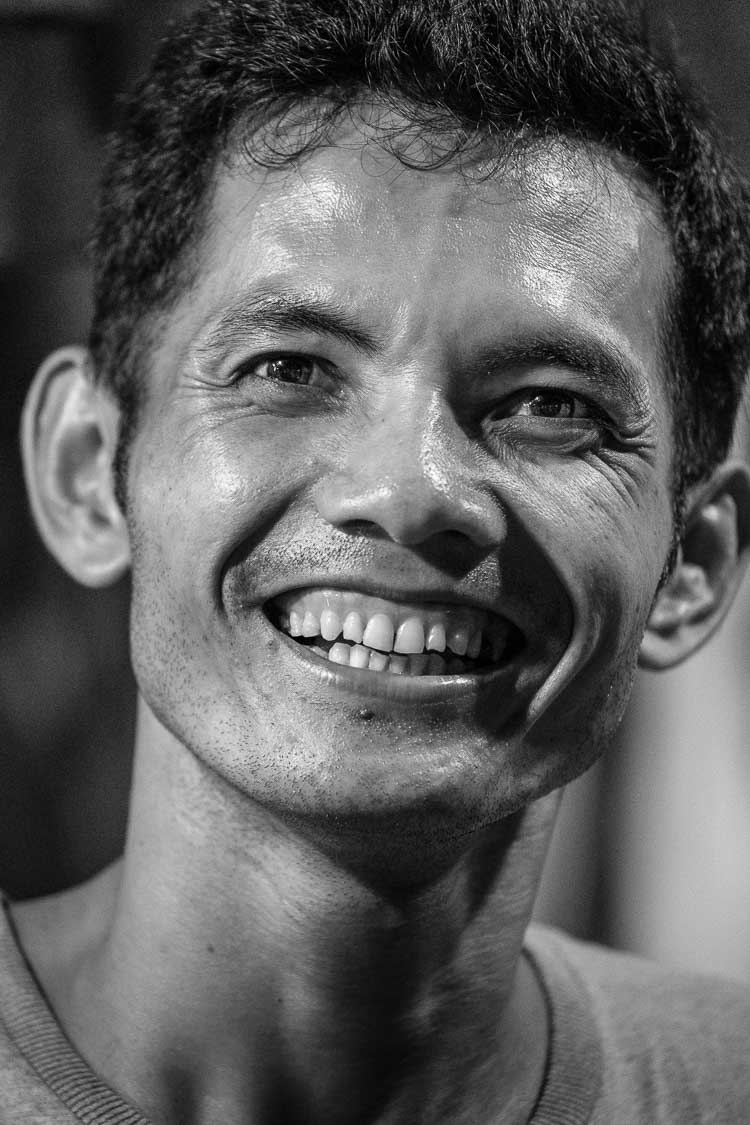 Don’t copy me - take what you think you’ll enjoy. But for context, here’s what I took, and what I’d change:

The whole lot plus clothes for wet and dry weather and personal items snuck under Air Asia’s 7kg carry-on limit once we’d stretched that vague “one personal item or laptop case”. We had no checked luggage.